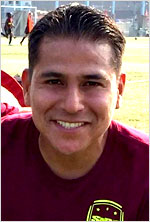 While pursuing his Sports Management degree at St. John’s University, Harry interned at the NFL headquarters on Park Avenue. After completing his internship, he worked full-time at the NFL, while coaching part-time. In order to master the craft, Harry began focusing on soccer full-time and started the path toward attaining the highest credentials in coaching education. Throughout the process, he’s traveled to courses in the US, Brazil, and London. In 1999, Harry began to develop an Academy setting in Brooklyn, in order to fill a void in the community and create a culture of quality and results.

Harry began working on his coaching craft with the help of NSCAA Senior Staff coach, Ron McEachen. Ron is a prominent figure in American Soccer, with a successful career as an MLS assistant, and Head Coach at The University of Vermont and Skidmore College. Harry’s successful rise through the National coaching courses, earned him invitations to be on the Associate Staff for the NSCAA.

Harry’s ability to develop players, teams, and clubs, has been proven several times in the past decade. His experience directing clubs began in 2001, at the Allendale Soccer Club, in New Jersey. At Allendale, he directed a staff that ran the recreational clinics and travel program, overseeing the growth of the club to more then 25 teams by 2006.

By 2006, Harry also started to direct Gjoa, in Brooklyn NY. In just a few years, Gjoa would return to local prominence. Harry implemented a club philosophy, protocols, and the coaching methodology that helped increase enrollment from under 5 teams to 20 teams representing Gjoa/SABA by 2010. The quality of teams and players, under Harry’s guidance, began to attract local attention and put Gjoa back on the map.

In 2011, with the support of longtime friend and club president Jim Vogt, Harry took on a new project at Met Oval. He provided the club with teams in progressive age groups from U8-14. Teams now played under the Met Oval/SABA banner in the NYCSL and the top SABA players represented Met Oval at the Pre-Academy and Academy level. Harry increased club enrollment to an average of 200 players by 2012, before leaving to start a new venture.

In Fall 2012, Harry restructured SABA to establish independence. The club now sustains its own resources to register players, acquire home fields, enter leagues and tournaments, and streamline uniform designs and delivery. In just a short time, SABANYC has become a recognizable brand, continuing to maintain a positive reputation throughout Brooklyn and the NYC Metropolitan area. 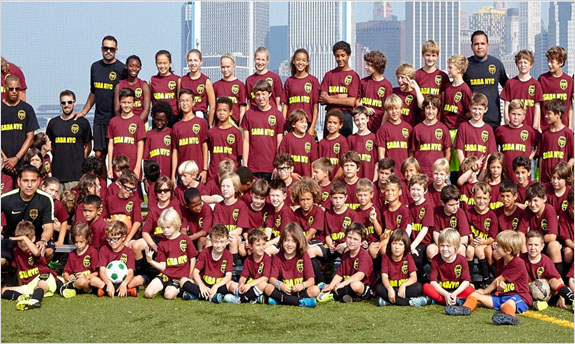 Success coaching at the youth level

While building a formidable and respected youth program, Harry has coached players that have achieved local, regional, and international success. On the local and regional levels, Harry has led teams to championships in the top bracket of prestigious tournaments such as the Columbus Cup, FC Europa Turf Cup and the Jefferson Cup. The Atletico boys have been finalists at Delco two years in a row. His girls Y-League team was the 2015 National Runner-Up.

Internationally, Harry traveled twice to coach at the famed Toekomst, where his teams matched up against youth professional teams at the Ajax Academy. While in the Netherlands, Harry’s team also played in the Haarlem Easter Cup, capturing the Championship and Fair Play Award. 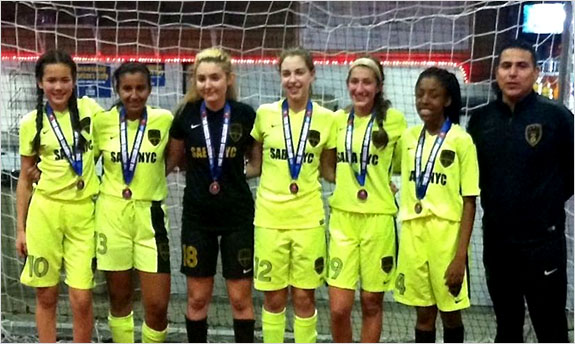 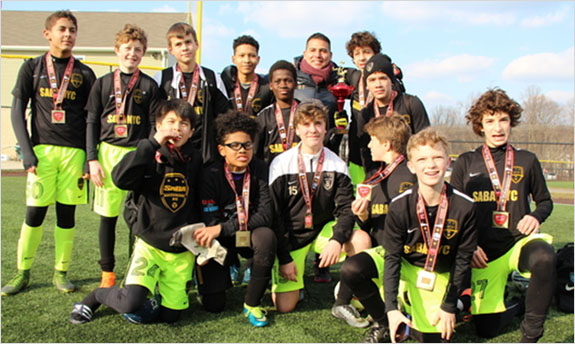 In 2015-2016, 8 players who have developed under Harry’s guidance have been selected to Regional Select Squads. Four Atletico players were selected for an international showcase in the UK. On the girls side, Four players were chosen for a showcase in Canada during theWomen’s World Cup.

Harry was an assistant coach at Manhatanville College from 2005-2007. During his time at Manhattanville, he assisted in running practice sessions, scouting opponents, and led the team as a head coach on several occasions.

Harry was the head coach at St Ann’s in Brooklyn, guiding the Girls Varsity team to the 2001AAIS Finals, their first in school history.

Harry is a well-known New York City soccer product, having spent over 30 years with some of the area’s most historic and successful youth, men’s, and college teams. An attacking midfielder throughout his youth career, Harry was part of one of the most recognized teams to play at B.W. Gottschee. The Gottschee 73’s achieved nationwide success throughout the early 90’s. Harry was part of nationally ranked teams that went on to capture the U19 State Championship and reached the US Youth Cup Regional Finals.

As a member of the Olympic Developmentand CJSL Select Programs, Harryplayed at the Bermuda Cup and the Select squad reached the semi-finals of the Dallas Cup.

As the Captain of the McClancy High School team, Harry led the squad in goals and assists and helped the school capture its first-ever City Championship.

Harry played for National Powerhouse St. Johns University where he was a member of the school’s fourth consecutive Big East Championship squad in 1995. Before transferring to St. John’s, he played at National Power Ulster. Harryturned down Division 1 scholarships to go to Ulster and play for legendary coach George Vizvary, the winningest coach in NJCAA history.

In both years, the Ulster teams were in the NJCAA National top 10 from preseason to postseason. The team captured the Regional Championship Title andplayed in the NJCAA Final Four. Harry was selected to the All-Conference and NJCAA All-Region First Teams.

Harry signed with the Brooklyn Knights of the United Soccer Leagues, during their league debut in the summer of 1998. Triana anchored the midfield for the Knights from 1998-2000. Unfortunately, he tore his ACL before the USL playoffs in Mississippi. Several knee injuries continued to interrupt his career but In 2001, the NY/NJMetrostars of the MLS signed Harry during the Copa Merconorte international tournament.Harry later resigned with the Brooklyn Knights in 2005. 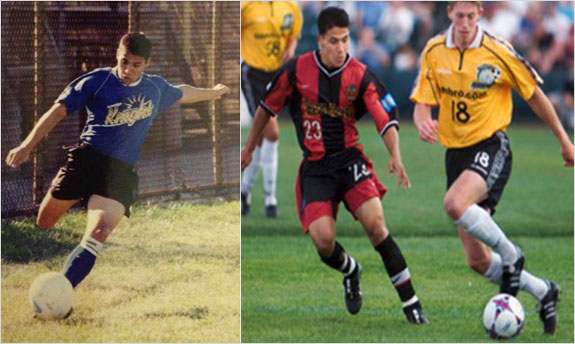 The Trianas are one of the most famous soccer families in New York City. The list of brothers who’ve made their mark on the soccer scene dates back to the 70’s when the family arrived from Ecuador.Six brothers have played Division 1 soccer locally at FDU, Columbia, and St. John’s. 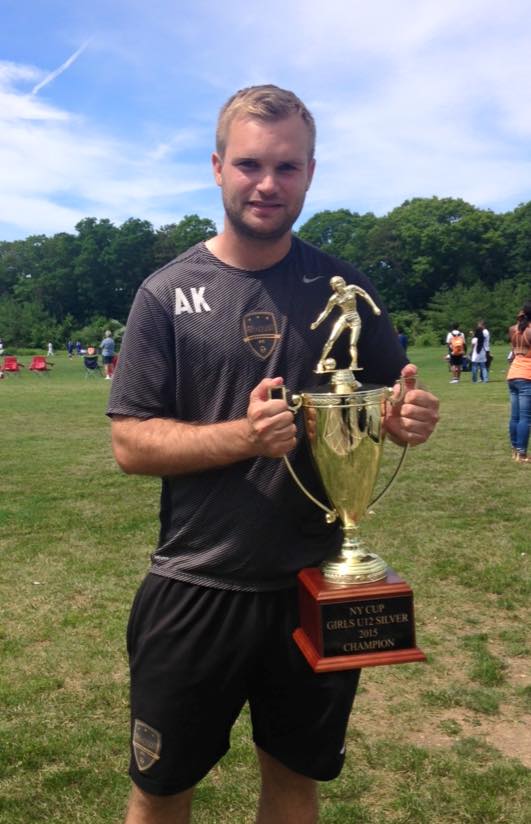 Adam began working with SABA NYC during its inaugural season (2012) as a newly independent travel club, a change from its previous structure as an coaching organization when first formed in 1999.

Since the beginning of this historic change, Adam played a pivotal role in the successful development of SABA on and off the field. Adam’s impact on all the players and families he worked with over his 8.5 years with club as director strengthened the club’s reputation throughout the New York metropolitan area.

Adam was able to foster a positive environment and a strong work ethic whilst importantly instilling tactical disciplines and attacking creativity. This has allowed a number of teams under Adam to compete at the very highest level within the region. Adam has demonstrated first hand the importance of patience and belief in the long-term process.

The notable club first accolades Adam successfully brought to SABA include winning NY State Cup, NYPL D1, EDP D1, Metropolitan League D1 and FC Delco Players Cup. Furthermore, Adam and Harry collaborated together with a talented U15 Super-Y girls team who achieved runners-up in USL-Super Y Nationals held in Florida. Adam also successfully led SABA’s first-ever team into the NPL league in 2019, a group he had developed and led for over 5-years. This success was achieved through a committed set of players, built organically over a sustained period of time. 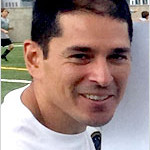 John enters his 11th Year at SABA. He is a strong proponent of coaching education and exercise science, bringing quality training to all his teams.  John’s education, background in multiple sports, and the ability to apply the latest methods in exercise science, are qualities that provide a knowledgeable and capable Technical Director to the club’s leadership group. He is recognized for his detailed and consistent communication of his objectives to parents. 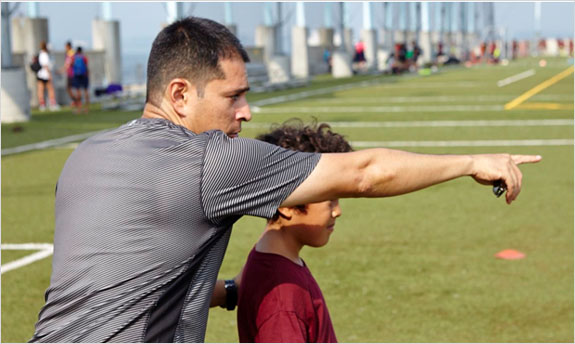 A 3-sport athlete while at Kent in Connecticut, John was a member of the Soccer, Lacrosse and Wrestling teams. He then played for NYC Power Holy Cross.  John played college soccer at FDU and is one of 6 Triana brothers to play Division 1.

After receiving a BA from Queens College, John received a full scholarship to attend the University of Alabama. He attained his MFA as part of the Alabama Shakespeare Festival. John also enrolled in the Exercise Science program at SUNY Cortland from 2012-2013.

John is an accomplished guitar player and has studied Flamenco in Spain.  As an actor, he’s worked in numerous productions of Shakespeare throughout the country and had recurring roles on As The World Turns and Days of Our Lives. 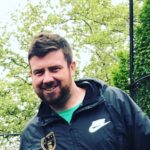 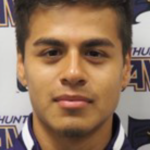